Towers are an objective in Paragon. Towers are powerful structures that must be destroyed in succession to progress to the enemy’s Core. The first tower in a given lane (the Outer Tower) must be destroyed before the second tower (the Inner Tower) will sustain any damage, and so on. Towers have powerful defenses that make them formidable obstacles. Each lane has two towers protecting it. Towers are large buildings that will fire repeatedly on any enemy (minion or player) that enters within its range. Towers prioritize targeting Minions over players unless the enemy player "draws aggro" by attacking a friendly player who is also within range of his tower. If a player is being shot by a tower, he can quickly back out of its range until friendly minions arrive, then follow them to the tower in order to resume attacking safely. 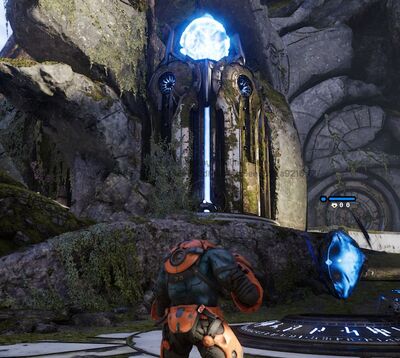 Towers can withstand a good deal of damage 1 from enemy Heroes and will target them if there are no minions in range, dealing a considerable amount of damage to even the most powerful Heroes. Dealing damage to an enemy hero while within their tower range will cause the tower to target the aggressive hero, so be wary of dealing damage to enemy heroes while near their tower. Towers have a targeting beam that selects its current target. If the targeting beam is active, the tower is active, firing shots every few seconds. The targeting beam will instantly switch from target to target to show players and give them ample time to react, should it land on them. Towers also cause enemy Heroes within a certain distance to become visible on the minimap, alerting allies to the location of members of the other team.

Destroying a Tower pays out Experience to all nearby Heroes, drops Amber coins, and gives a Card Power bonus to the entire team. When minion waves reach an enemy’s tower, you will have time to deal damage to it because the Tower will target your minions as long as they are in range. Towers, Inhibitors, and the Core have very handy built in indicators below their health bars that display how many enemy minions are within their attack radius. Timing and pushing lanes with your minions is the key to taking down towers and winning the game!